Self portrait with kick lights


After started doing wedding photography am not getting enough time to work on my personal photography, i couldn't go anywhere. Merely sitting in my home and working on wedding photos. Then i decided why not another self portrait since i can do it my room itself, but am sure i dont want it be same as any before. Since i have long hair and beard i decided to do a dark portrait with no front lights,so i oiled my face and hair well enough.I wanted to wear a black full hand shirt but i am not having one in black but in checked black & brown, but then i realized that since there is no light in front it will not show it off too much. I kept 2 lights behind me- one on left , another on right with softbox .I was tried keeping a reflector in front but it was giving some color and brightness to my face so i removed it. After taking the photo i felt lighting was ok but it was blank, so i decided to add coolers and a cigar to create a dramatic effect. I went out and bought one cigar(since am not going to use that i decided to go for a cheaper cigar, but after going to a tea stall i dono how to ask for a cheaper one in front of other customers, so i simply asked a scissor and he gave me one for 4rs.) . The bud was broken from cigar half way during the shoot since i was keeping in my mouth for long time and also my face and hands were oily, what to do,then i pasted it with tape and resumed the shoot. The problem is, i want the picture to be natural, but i dont smoke,later i decided one minute doesnt matter so i decided to lit it up, but my brother who was clicking the photo was not allowing me to do so. He was simply saying-- do u remember mukesh, ( if u dono mukesh go to nearest cinema theater, u will come to know who is mukesh before the movie starts). Also, i cant hide the smell from my parents (they are already suspecting that i starting drinking after seeing a win bottle in home which i got to make a photograph ) so i decided to take 2 photos and tried my best to make it out . Once the edit was over i was confused whether to go with colored one or black & white. Since i took some effort to make the cigar fire as natural i decided to go with color :)  Here i have attached both with some other photos i took during this shoot. 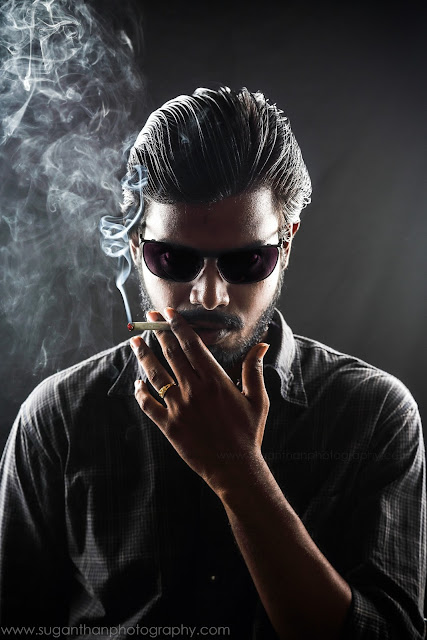 same version of black and white. 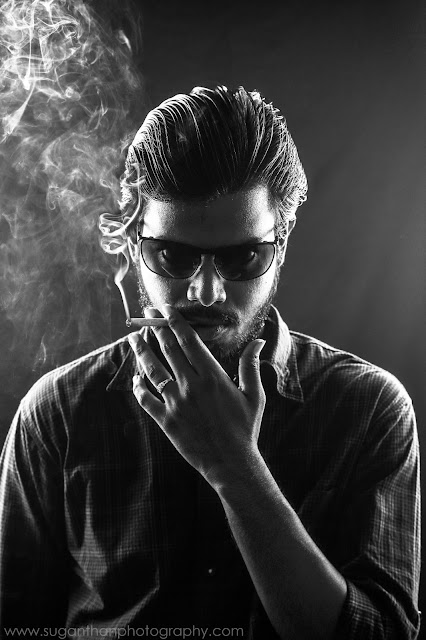 Another photo from the shoot 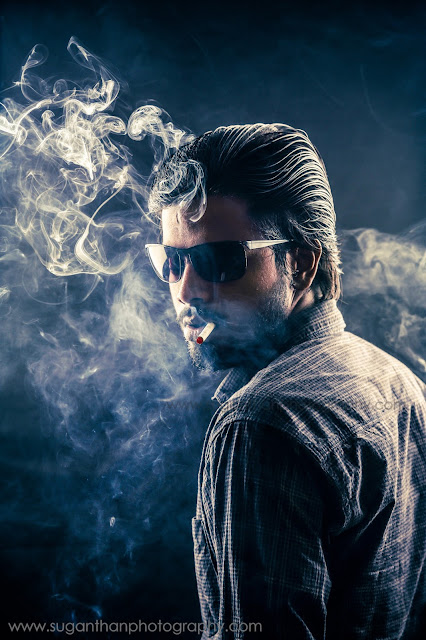 Posted by sugan at 5:23 AM
Email ThisBlogThis!Share to TwitterShare to FacebookShare to Pinterest

sugan
A world of life started with a VGA camera 4 years back as a hobby which turned as a passion when i bought my first SLR canon 550D. After 3 years in Software now my passion undertook my profession. Now am enjoying every bit of my life. Am really feeling happy that am destined to save your present moment for your future memories.